The French Broad River may be the oldest on the planet. It predates the mountains here, which rose up as the river continued to carve its way down. Like any such watercourse the level changes constantly, but thanks to the mountainous terrain in the drainage area the flow can change dramatically in a very short time. Painting at the Ledges for a few hours I have watched as more and more rocks were exposed as the water receded. In any event, painting the river is a constant challenge and an endless pleasure. The first three paintings below are: Below the Ledges, Painting below the Ledges, and the Ledges in August. 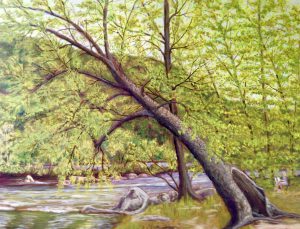 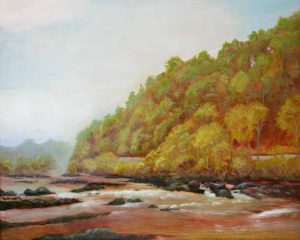 The painting on the bottom right is a rocky shoal on the Broad River which drains a valley in southeast Buncombe County. While the French Broad flows north and west (to the Tennessee, to the Mississippi and the Gulf of Mexico), the Broad River flows south and east to the Rocky Broad and eventually to the Atlantic. Below is Sunrise over Broad River (A view from Chimney Rock State Park).

Posted on September 1, 2016 by cbothwell. This entry was posted in Paintings. Bookmark the permalink.