A very brave cat and an artist’s statement

I dropped out of college in 1970 to paint, showing my abstracts at sidewalk shows for a couple of seasons which naturally enough led to marriage, formation of a rock band, a stint as editor of a literary journal, a career as a green builder, winning the 1993 Southeast Poetry Slam, creating the Warren Wilson College enviro journal, Mountain Xpress managing editorship, and election to Asheville City Council in 2009. I returned to painting in the late 00s.

Today I am drawn to realism: land- and water-scapes, decaying barns and chickens. Lots and lots of chickens. In 2016 I commenced to paint a series of sunsets from places where I’ve watched the sun set—from Key West To Alaska and Mazatlan to Newfoundland.

In 2000 I decided to start publishing books and decided to call my company Brave Ulysses Books. Brave Ulysses was my very best cat ever, the runt of a 9 kitten litter, and so-named to give him courage. Sadly, he was killed by an idiot with a gun when he was only 10 years old. Here, he lives on. 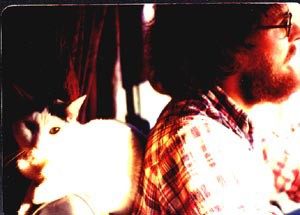 In the past 16 years I have published ten of my own titles (with bi-annual updates of Finding Your Way in Asheville), and published or facilitated publication of four other authors.

Posted on April 15, 2015 by cbothwell. This entry was posted in History. Bookmark the permalink.